What is significant about Jubilee Park?

Following the proclamation of the Township of Ringwood sales of housing allotments commenced in 1886, four years after the railway to Melbourne had opened. The land boom of the late 1880s saw the first residential subdivisions created around the Ringwood Railway Station. However, little development occurred until the early twentieth century and by the early 1900s the population of Ringwood remained relatively small: 488 (Maroondah Thematic History).
In 1913, when 50 shops and dwellings were constructed, Ringwood was described as having a ‘minor building boom’, and the connection of the township to electricity by 1915 and a reticulated water supply by 1920 encouraged further development. However, it was the electrification of the railway in 1923, which slashed commuting times to Melbourne that led to the first residential building boom. In 1921 Ringwood’s population had reached 2,000 and by the 1940s it had doubled to 4,000 (Maroondah Thematic History).
Ellison Street and Haig Street were created c.1921 as part of the Ringwood Township Estate, one of several residential subdivisions released in anticipation of the electrification of the railway. The land was once part of the orchard of Count Von Horn (Carter). 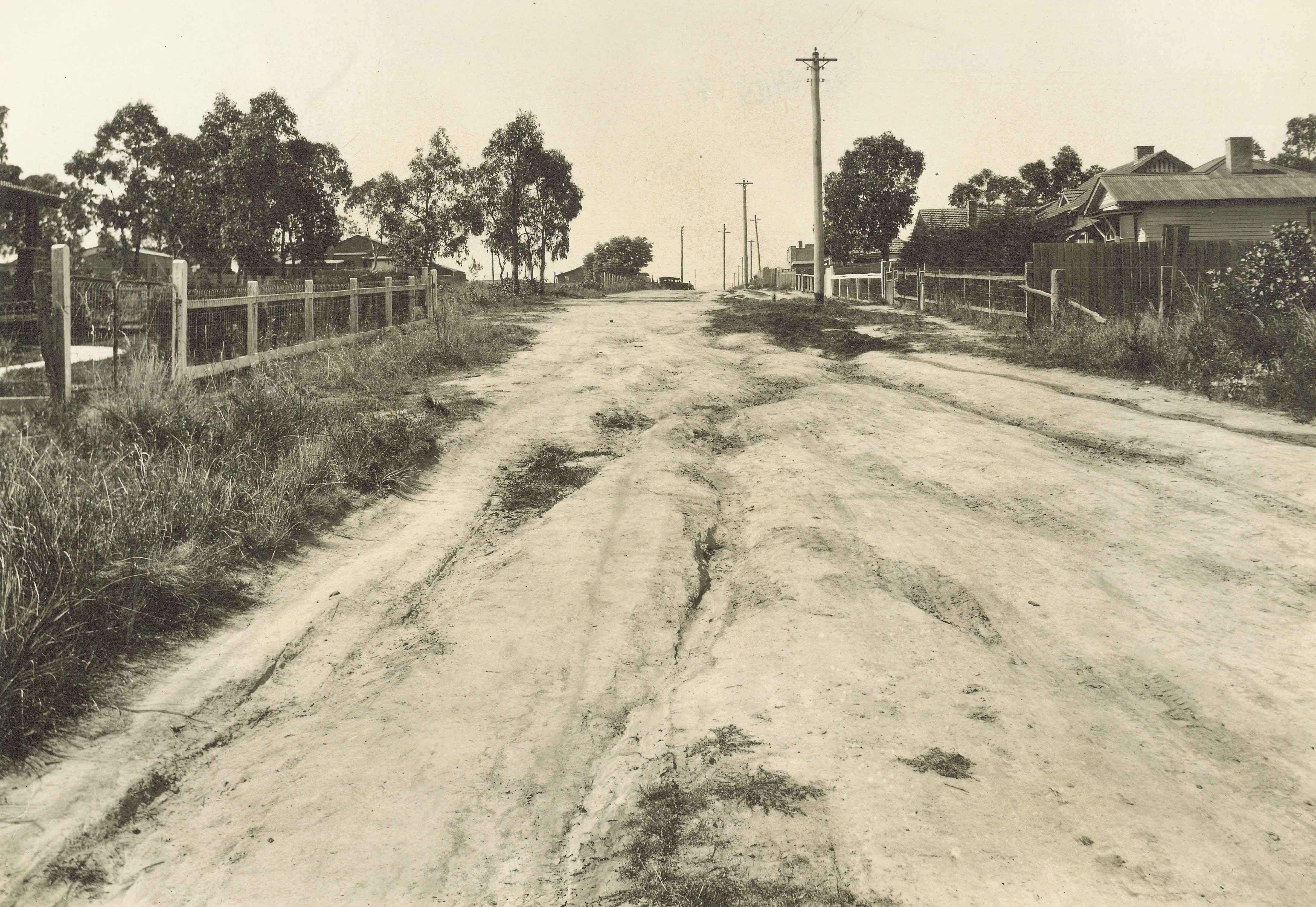 What is the purpose of Amendment C116?

The findings of the Jubilee Park Heritage and Neighbourhood Character Study Final Report, February 2018 provide the strategic basis for this Amendment.

The map below shows land affected by the three new planning controls proposed. 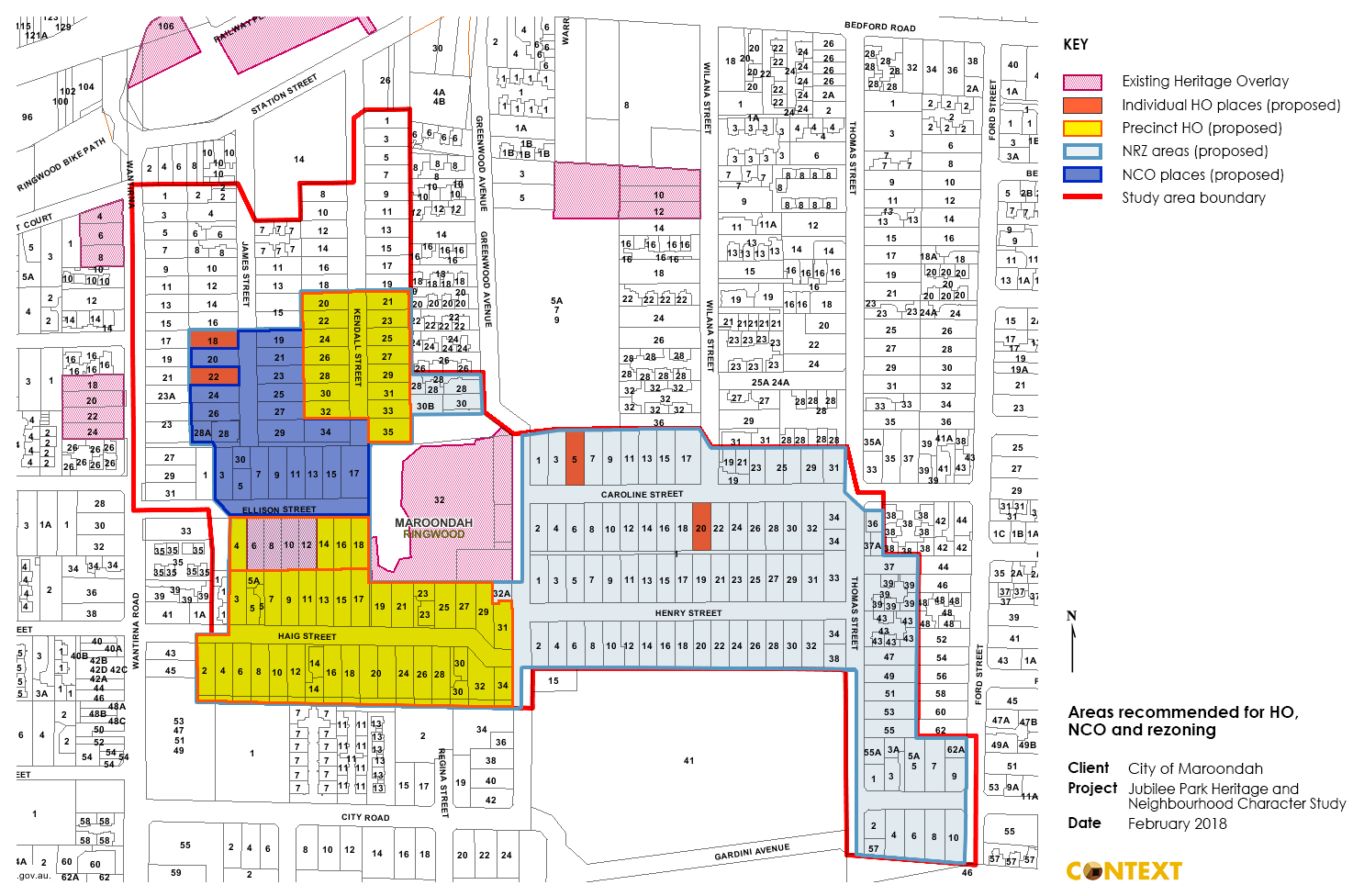 What is the Neighbourhood Character Overlay?

A number of properties are proposed to have a Neighbourhood Character Overlay Schedule 3 (NCO3) applied.  The Study identified some key elements that define the neighbourhood character of Jubilee Park, specifically the southern ends of James and Kendall Streets, and almost the full extent of Ellison Street and Haig Street.  These comprise the built form and spacious garden settings viewable from the street.

The provisions of the NCO3 require a planning permit to: 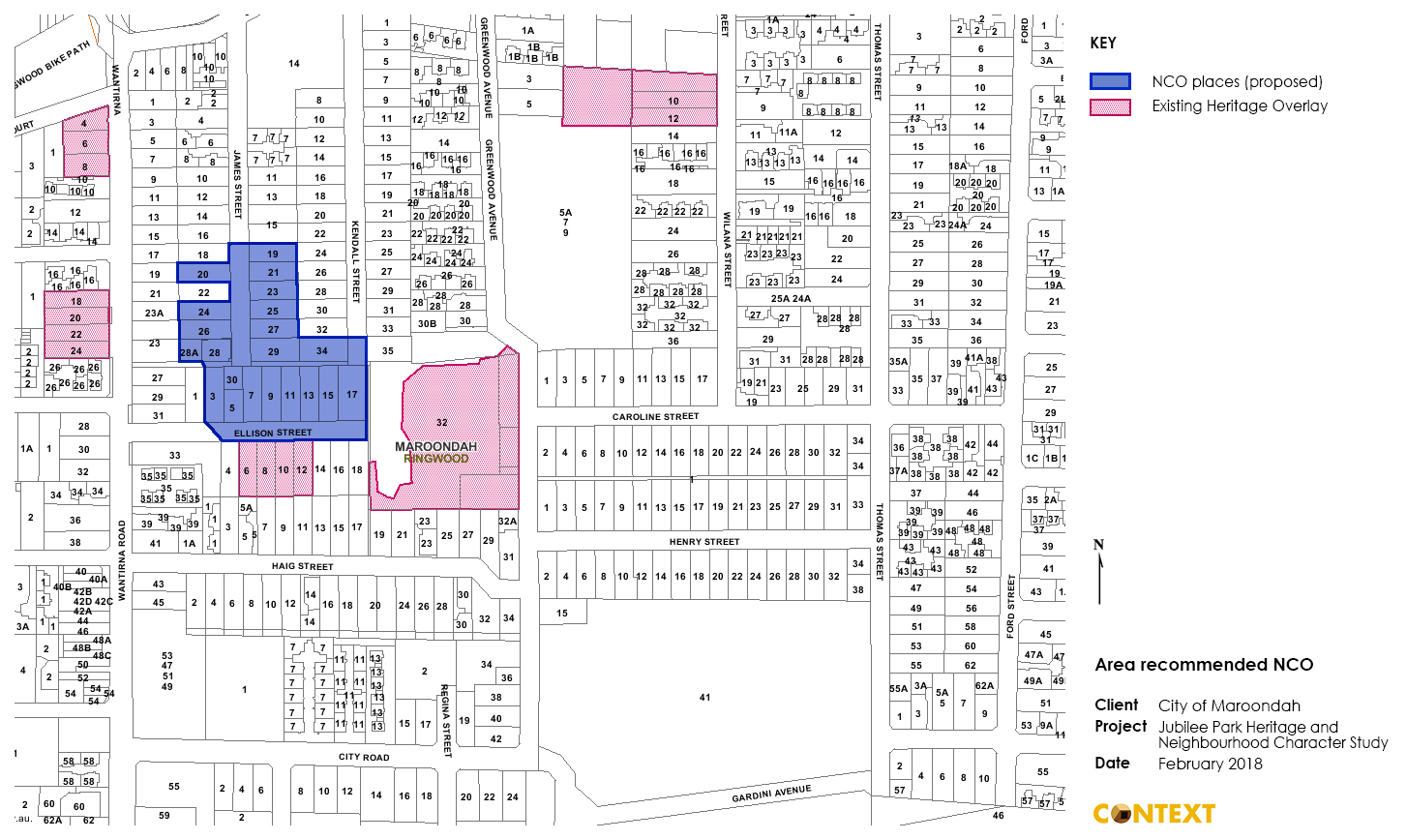 What are the Heritage Controls?

A number of properties in the area are proposed to have Heritage Controls. Interim heritage controls have been applied under Amendment C117 while Council progresses permanent controls through Amendment C116.

Please note that the Minister for Planning has approved Amendment C135maro to the Maroondah Planning Scheme. The Amendment extends the expiry date of interim Heritage Overlay controls for places and precincts within the Jubilee Park heritage area in Ringwood (introduced through Amendment C117) until 31 March 2020.

A full assessment of places identified in the study area revealed that several properties in the Jubilee Park Study area meet the threshold of heritage local significance and warrant inclusion in the Heritage Overlay.  A property with heritage overlay controls will require a permit for any external alterations (excluding maintenance); demolition, building works or extensions to a building. 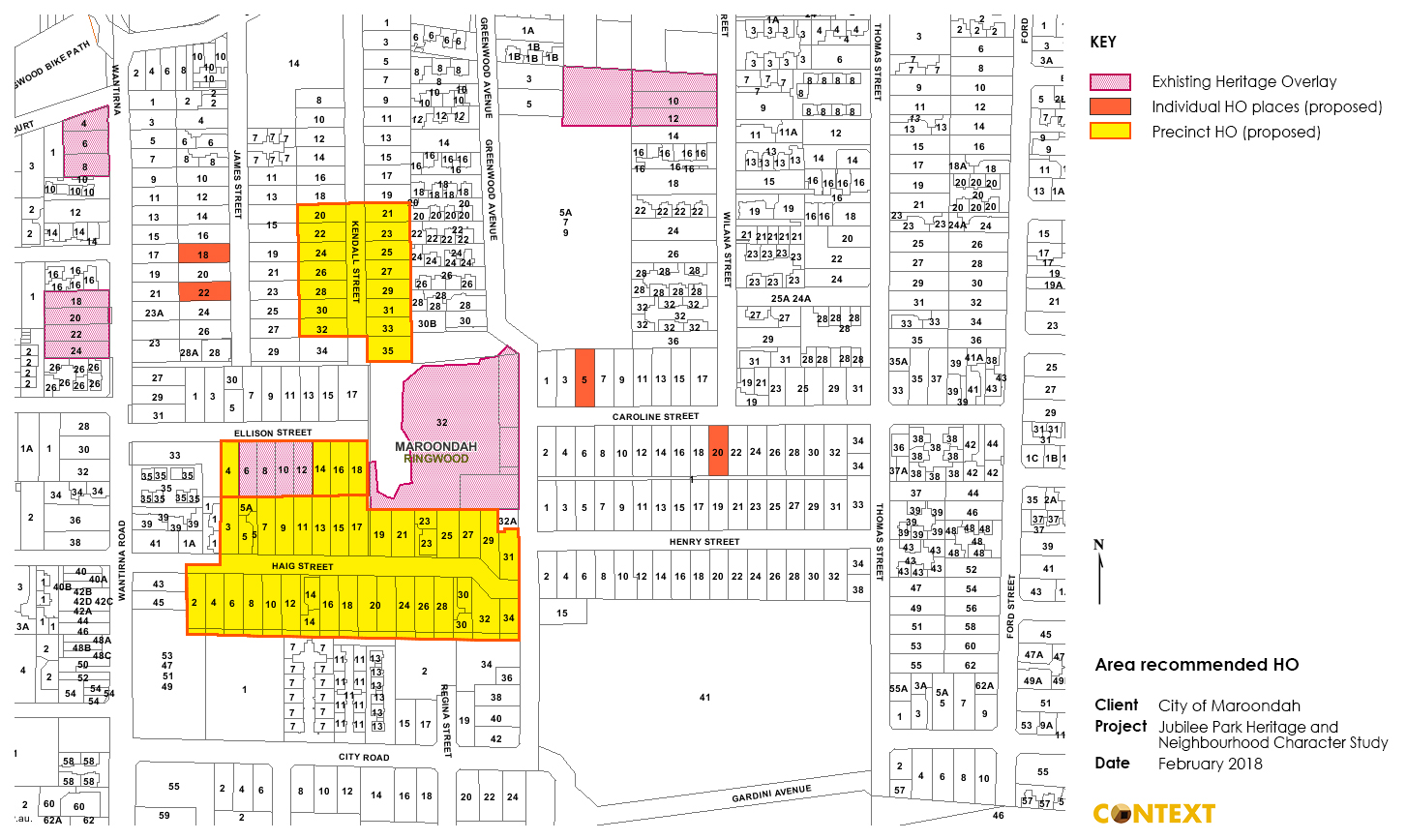 What is the Neighbourhood Residential Zone Schedule 5 (NRZ5) proposed?

The rezoning of land to NRZ5 responds to the implications of Amendment VC110 introduced by. the State Government on 27 March 2017.  Amendment VC110 withdrew the restriction previously contained in the Neighbourhood Residential Zone that no more than two dwellings were allowed on a lot.

The purpose of the Neighbourhood Residential Zone is considered more appropriate to the Jubilee Park area, as it recognises areas with predominantly single and double storey residential development, and is intended to manage and ensure that development respects the identified neighbourhood character, heritage, environmental or landscape characteristics of an area.

The proposed rezoning will introduce a mandatory 9.0 metre maximum building height and maximum 2 storeys, as opposed to a mandatory 11 metres and maximum 3 storeys currently applicable under the General Residential Zone.

What is the background to this Amendment?

During the preparation of the Maroondah Housing Strategy in 2016, residents of the Jubilee Park/Federation Park area expressed concerns about the impact of recent residential developments within the area.   A petition signed by 163 residents of Jubilee Park stated that “…without formal recognition of the unique neighbourhood character, heritage and vegetative nature of middle Jubilee Park surrounding Federation Estate and Jubilee Park Ovals, this pocket of Ringwood will lose its character, which is valued by both residents and the broader community.”
An action was subsequently included in the adopted Maroondah Housing Strategy as follows:
“Review neighbourhood character elements including heritage of the Jubilee Park area.”
In August 2016 Council engaged Context Pty Ltd and Claire Scott Planning as independent consultants to undertake the Jubilee Park Heritage Review. The findings of the Jubilee Park Heritage and Neighbourhood Character Study provide the strategic basis for this Amendment.
The Study recommended an integrated approach to the application of statutory planning controls, namely overlays and zoning provisions.
A Steering Committee was established comprising representatives from the Jubilee Park Residents Group, the Ringwood Historical Society and Council.  The Committee provided valuable feedback on project methodology and community engagement. Their feedback was incorporated into the fieldwork and final documentation.
View the Jubilee Park Heritage and Neighbourhood Character Study Final Report, February 2018
top of the page

What community consultation has been undertaken prior to the Planning Scheme Amendment?

Community input previously provided to Council during the Housing Strategy was taken into consideration in the preparation of the Study.
Council subsequently made available a community values survey to gain a more detailed understanding of issues in the study area.  It was accessible online and was open from 24 October 2016 to 25 November 2016.  A total of 125 responses were received. 75% of respondents indicated that heritage and neighbourhood character should be protected through the Maroondah Planning Scheme. 73% of the respondents expressed a desire to learn more about the planning controls available to protect the heritage and neighbourhood character of the area.
An information brochure was also circulated by Council to residents to inform them of the Study.  The brochure included information on the outcomes from the community value survey.  A total of 267 brochures were distributed.
In summary, residents expressed strong support for preserving the heritage of the area including its current low rise scale.
top of the page

What are the next steps in the process?

The Amendment will be on public exhibition until 13 December 2018. During that time, anyone can make a submission.

Once the exhibition period has finished, Council will engage with submitters with written concerns. If these cannot be resolved, the Amendment will be referred to Panels Victoria for a public hearing. Following the hearing, the Panel will make recommendations as to how issues should be addressed.

Where can I find further information?

Further information can be viewed on Council’s website at www.maroondah.vic.gov.au.

The full set of Amendment documentation can be viewed on the website of the Department of Environment, Land, Water and Planning (DELWP) at www.delwp.vic.gov.au/public-inspection

Council’s Strategic Planning Team are available to answer questions and can be contacted on 1300 88 22 33.

How do I make a submission?

Any person who may be affected by the Amendment may make a submission to the planning authority about the Amendment. Submissions must be made in writing giving the submitter’s name and contact address, clearly stating the grounds on which the Amendment is supported or opposed and indicating what changes (if any) the submitter wishes to make.

The closing date for submissions is 13 December 2018. A submission must be sent to Mr Phil Turner, Director Strategy and Community, Maroondah City Council, PO Box 156, Ringwood 3134 or via email at maroondah@maroondah.vic.gov.au.

The planning authority must make a copy of every submission available at its office for any person to inspect free of charge for two months after the Amendment comes into operation or lapses.